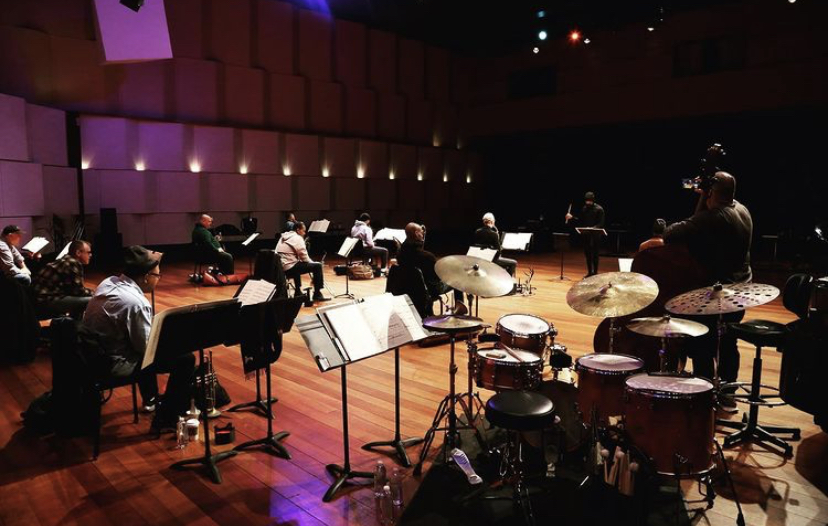 Musicians of the Jazz at Lincoln Center Orchestra spaced 6 feet apart with no audience.

With tens of millions of Americans having been laid off in the worst economic downturn since the great depression, the cliche of the ‘struggling artist’ has become all the more common. COVID-19 has caused closures of prominent venues such as the Jazz Standard and Slim’s, and many musicians who would frequent these clubs and bars were left without a gig that could pay the bills.

According to the United States census, there are currently over two-million performing artists in America, ninety-five percent of which have seen a cut in pay during the pandemic. Many musicians have taken up online lessons while others make what money they can doing live streamed concerts; whether it be on instagram live or private concerts on zoom. And though this provides some cash flow for them, nothing can take the place of an in person venue and audience to provide for musicians.

This is added tension to the already unpredictable ebb and flow of the gig economy, in which many musicians are often left with unstable sources of income. In response to this, organizations like the New England Musicians Relief Fund, or NEMRF, and the Performing Arts Worker Relief Fund have put together pandemic relief packages of over $100,000 to assist local musicians in paying their cost of living.

These types of organizations are crucial during a time like this, as government subsidies and relief packages are difficult to organize for musicians, as most performing artists are not specifically employed to one establishment.

In addition to individual artists being socioeconomically impacted by the pandemic, Band, theatre, and choir programs have also been affected on all levels. With band students having to play with instrument coverings and choir members having to sing with masks, the ability to run a functioning arts program grows more and more tedious.

On top of this, students are only allowed to play and sing outdoors to combat the spread of COVID-19. Though these precautions are seemingly harmless, their impact is vast according to Pleasant Valley Senior drum major Landon Simmons.

“The most surface level issue is that the weather dictates how and when [the band] plays,” stated Simmons.

Dealing with pages blowing away and stands knocking each other over poses a baseline problem with rehearsing on a regular basis. If it is too cold, windy, or rainy, the rehearsal simply cannot happen. Additionally, the AM/PM model throws a wrench in the usual rhythm of the band.

Simmons added, “Scheduling is difficult without having a period of band every day. On top of this, [the band] can only practice as one cohort at a time.”

“I could see this taking two-plus years for the band to fully recover”.

Much of this setback in the music program has come from a loss of numbers due to COVID. Many former members felt that the new format of band had degraded the original experience that they signed up for. This lack of student participation may take a toll on how the band performs in future years.

One common denominator between performing artists and band programs in the US is the way that they both have to workarounds and solutions to these modern problems.

“The band now relies on technology for the most part. The only way that we can communicate with the full band is by way of email or google classroom” said Simmons.

On all fronts, the arts have had to stay creative to survive during the pandemic. And though it hasn’t been easy, in most cases, artists and art programs have been able to make ends meet. Nonetheless, the arts remain a vital part of our society and must be preserved and progressed through hard times like these.